Before vehicles become fully autonomous, it is likely that they will gain increasing levels of autonomous capabilities. Technologies such as adaptive cruise control (ACC) promise to be the first step toward an autonomous future. While often considered luxury products, in the last year they have become standard features on many vehicles, and are beginning to enter the mainstream.

While the prevalence of ACC systems is steadily increasing, the stability of commercially available ACC systems remains an area of great interest. Specifically, whether small perturbations from an equilibrium spacing are amplified or dissipated as they propagate upstream through a platoon of vehicles.

To answer this question, I have been conducting experiments with commercially-available ACC vehicles to see how they respond to disturbances when following a lead vehicle. This included a series of experiments together with Ford Motor Company at their Michigan Proving Grounds in Romeo, MI. The results of some of these tests are seen in the video by Ford linked below.

In congested traffic, minor disturbances or fluctuations in the velocity of a single vehicle may induce dynamically evolving traffic instabilities such as stop-and-go waves. This work demonstrates in simulation and through extensive experimentation that through intelligent control of a small number (e.g., 1-5%) of autonomous vehicles (AVs) soon to be present in the traffic flow, it is possible to dampen and in some cases completely remove these traffic waves in the entire traffic stream.

The concept of traffic stability with respect to stop-and-go waves dates back to as early as the 1950s and the early car-following models. Previously, control of vehicular traffic through intelligent vehicles has focused mostly on either platoon control or mixed human-automated traffic when a high fraction of autonomous vehicles are present in the traffic stream. In platooned traffic, the entire vehicle fleet is equipped with the same technology and communication hardware, and vehicles cooperate to achieve traffic stability. More realistic in the near future are systems with a mix of human-driven and autonomous vehicles. When a mix of AVs and human-controlled vehicles are considered, stability analysis is more challenging and simulation is commonly used to demonstrate stability. This work extends previous work in that it considers the local stability introduced by control of a single AV instead of a large number of AVs working together.

The main result of this work is the design of a feedback controller for an autonomous vehicle which stabilizes a microscopic model of traffic flow. The model is calibrated with field data collected in the ring road tests of Sugiyama et al. that demonstrated that traffic waves can arise in traffic in the absence of external bottlenecks. The collected datasets allow an Optimal-Velocity Follow-The-Leader (OV-FTL) model to be calibrated to reproduce the traffic waves observed in the experiments. Under the calibrated model parameters the model is shown to be unstable. Consequently a feedback controller is designed through pole placement and applied to a subset of vehicles, which stabilizes the traffic conditions and is shown to eliminate traffic waves. The presented work is part of a larger project to demonstrate the control potential of a few AVs in the traffic stream on the majority of human controlled vehicles.

In the summer of 2016 I led the experimental efforts to demonstrate the ability of a single AV in a stream of 21 other human-piloted vehicles to dampen traffic waves that naturally occur due to human driving behavior. For this experiment, the same circular ring-road setup was selected as in the experiments by Sugiyama, et al. The entire experiment was recorded by a 360-degree panoramic camera at the center of the ring road. Additionally, each vehicle was instrumented with an OBD-II scanner to track vehicle diagnostics and fuel consumption at the microscopic scale. 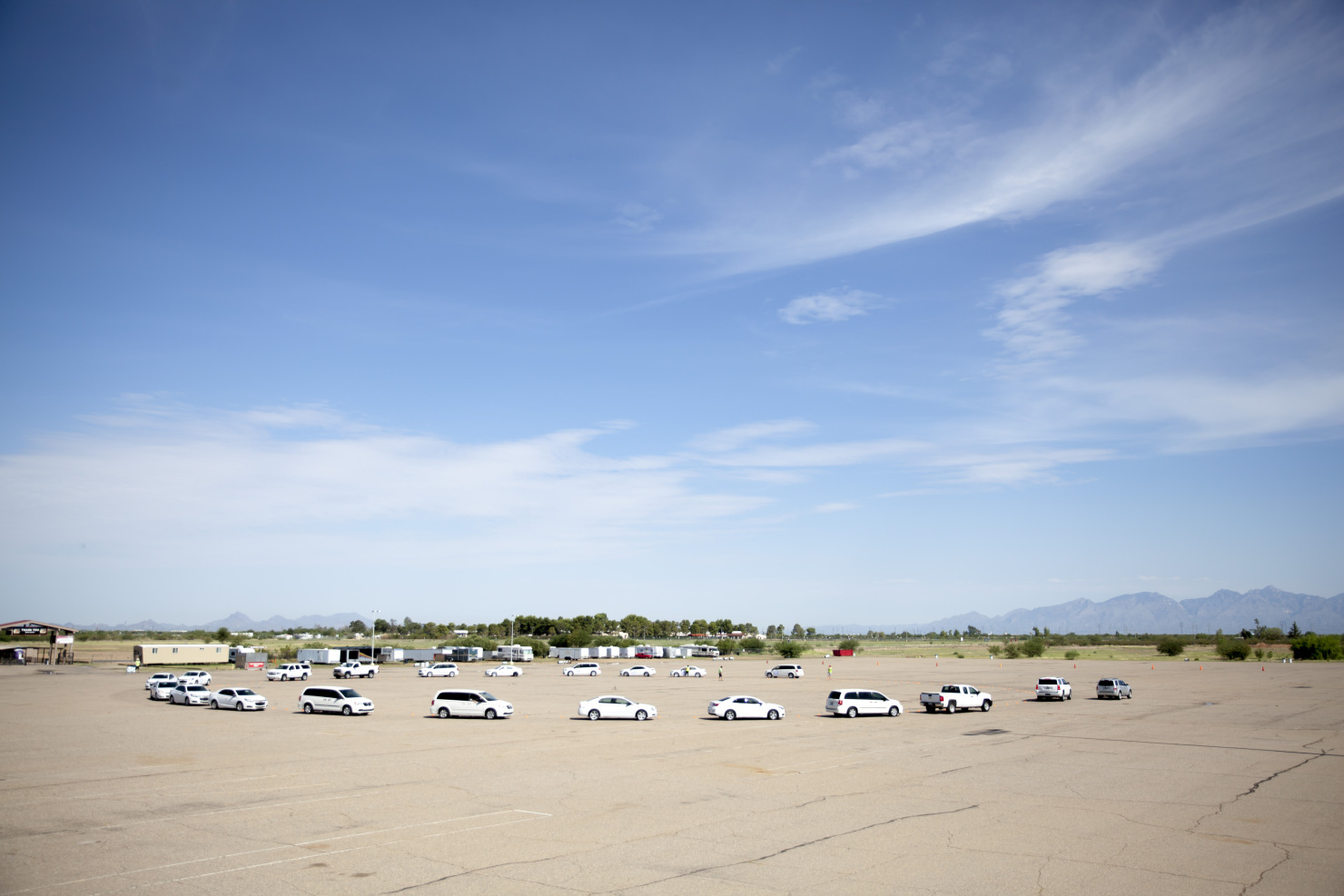 In addition to 20 human driven vehicles (the white vehicles in the picture above), we also used the University of Arizona Cognitive Autonomous Test Vehicle (CAT Vehicle) pictured below. The vehicle is a fully autonomous-capable Ford Escape and can be programed through the robotic operating system (ROS). 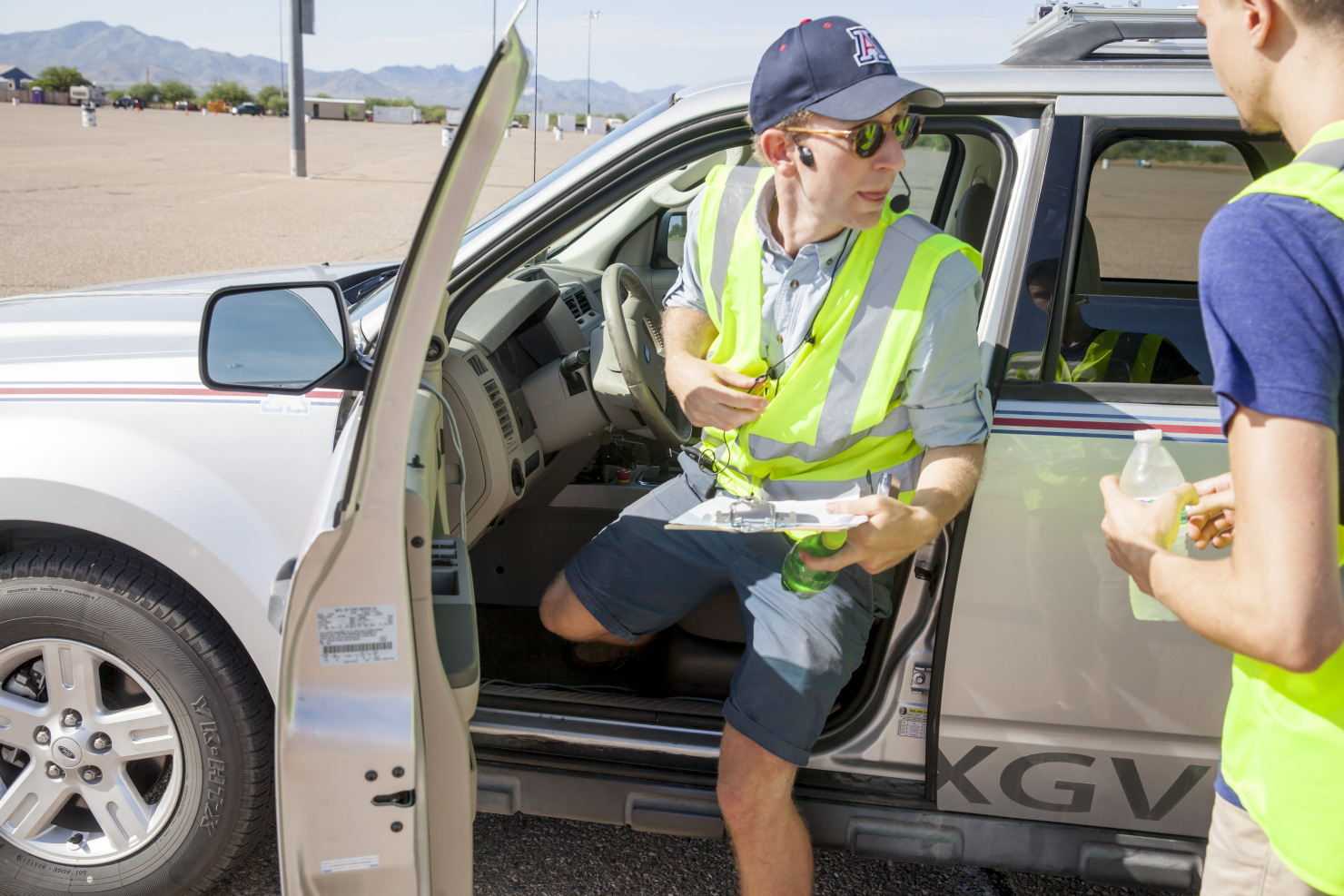 The results of the experiment demonstrated that not only is the AV able to dampen the traffic waves, but also has a significant effect on the performance of all of the vehicles (including the human-piloted vehicles) on the road. When comparing the time in which the AV is actively dampening traffic waves to the time period in which waves are present, the total throughput of the road is increased by 14%, the total number of breaking events are decreased by 98%, and the fuel consumption is decreased by 39%. 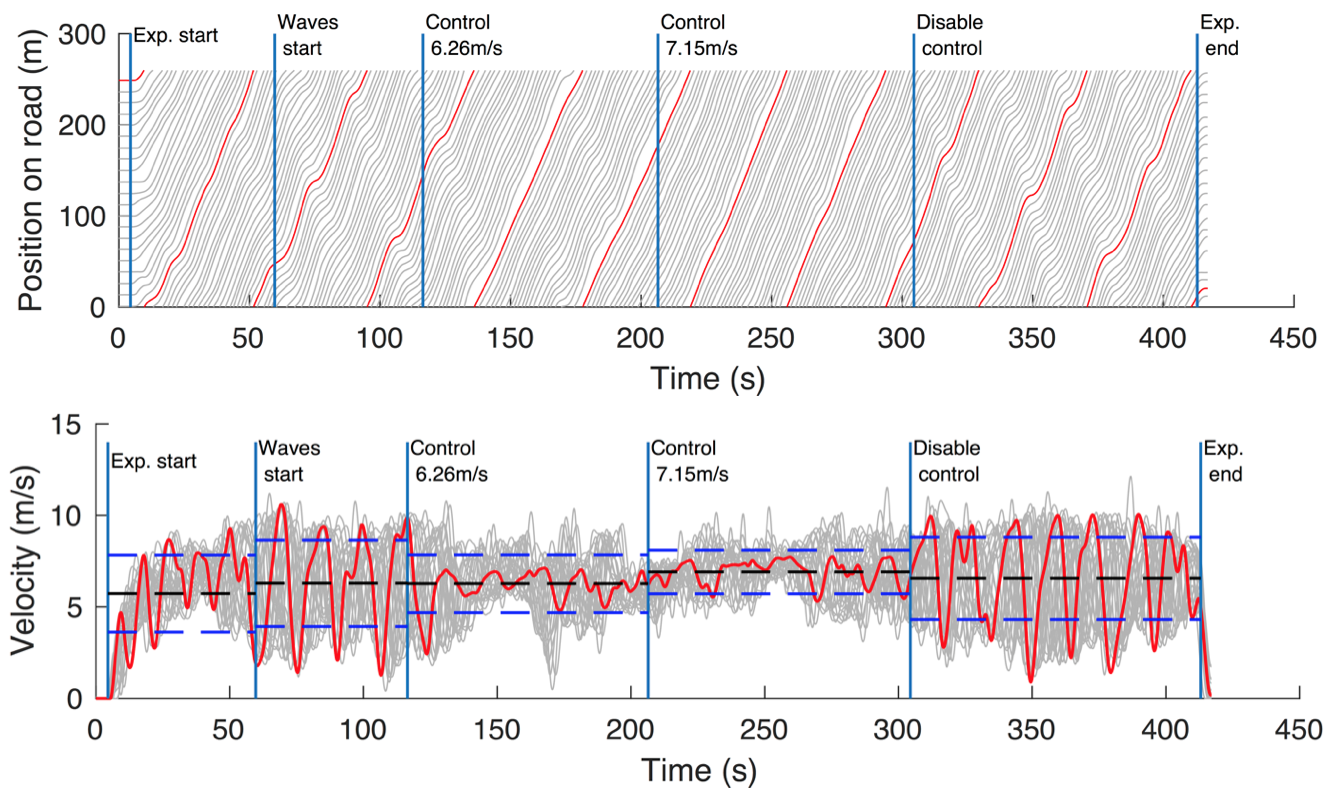 The societal implications of this work are broad since most drivers experience delays and increased fuel consumption due to unstable and non-uniformly flowing traffic. While complete automation of the entire vehicle fleet may be many years away, in the short term, it is likely that some vehicles will be capable of driving autonomously in the near future. This research demonstrates that a single autonomous vehicle can locally stabilize traffic in dense traffic flow, and prevent stop-and-go waves from arising.